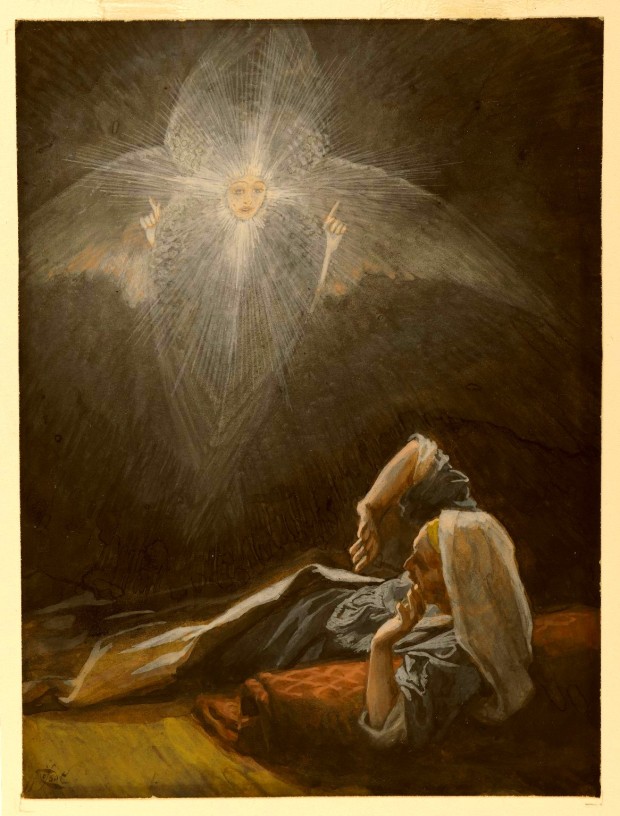 Now the birth of Jesus the Messiah took place in this way. When his mother Mary had been engaged to Joseph, but before they lived together, she was found to be with child from the Holy Spirit. Her husband Joseph, being a righteous man and unwilling to expose her to public disgrace, planned to dismiss her quietly. But just when he had resolved to do this, an angel of the Lord appeared to him in a dream and said,

“Joseph, son of David, do not be afraid to take Mary as your wife, for the child conceived in her is from the Holy Spirit. She will bear a son, and you are to name him Jesus, for he will save his people from their sins.”

All this took place to fulfill what had been spoken by the Lord through the prophet:
“Look, the virgin shall conceive and bear a son, and they shall name him Emmanuel,” which means, “God is with us.”

When Joseph awoke from sleep, he did as the angel of the Lord commanded him; he took her as his wife, but had no marital relations with her until she had borne a son; and he named him Jesus. 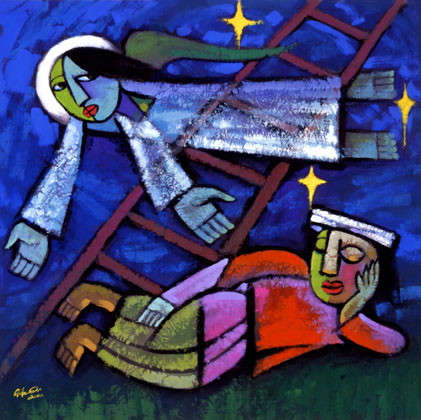 The Dream of Jacob. He Qi.

Well, this must have been awkward. Joseph and Mary are pledged to marry. They’ve probably gotten to know each other a bit. They’ve no doubt registered for gifts at the Nazareth market. The stage is set for a long, happy life together. And then she turns up pregnant. This would be an uncomfortable situation today, but it was, no doubt, far worse given the cultural norms of the time.

We want to imagine Joseph’s initial reaction as well as how Mary prepared to break the news. Did she just blurt it out? What was the conversation between them?

“I’m pregnant. But don’t worry, it’s from the Holy Spirit,” his bride says.

Joseph must have felt betrayed. He probably thought she was delusional. He may have rolled his eyes, raised his voice or both. Although they technically were not yet married, Joseph and Mary were in a phase where they were legally pledged to one another. Her
action would have been considered adultery. We don't know what the exact conversation was like. But we do know that it seems to have left Joseph unconvinced that Mary was telling the truth.

Joseph has the inclination that many might: I’ve got to get through this. He wanted a divorce (to remove himself from the situation), and he wanted it done quietly (to save her dignity– and perhaps prevent a death by stoning, which would have been an adulterer’s fate). Joseph had a few options at this point, neither of them good. Divorce put Mary’s life at risk. Going forward with the marriage put his dignity at stake, since the community would know that they had not yet formally married. Either he wasn’t the baby’s father, or they had engaged in premarital sex.

Most of the Christmas story is focused on Jesus and Mary. Luke tells this portion from Mary’s perspective. The Angel appears before her to say that she will bear a son, and that she shall name him Jesus. Joseph isn’t mentioned at all in Luke’s telling, other than to note that he is engaged to Mary.

Matthew is the reverse. This passage is all though Joseph’s perspective. The angel appears to him: Don’t worry. Mary is pregnant but it’s through the Holy Spirit. In Matthew’s gospel, Joseph is the one who is told to name the baby Jesus. When Joseph wakes, he is abeliever. He does as the angel instructs, and he takes Mary as his wife.

There are many miracles we look to this time of year. I’m certain that Joseph’s understanding is one of those miracles.

The hymn “Come, Thou Redeemer of the Earth” is a perpetual favorite of mine. At Westminster we employ it in a twofold procession. The first, perhaps most obvious, is the physical movement of singers from the rear of the sanctuary to the chancel. In so doing, we are reminded of entering into God’s presence as we worship.

The second is procession of sound. As the hymn retells the story of the coming Christ, the number of voices and instruments swells with each passing verse. In today’s recording, the first verse of the hymn is sung by five of our Girl Choristers. A small number of handbells accompany 40 of our youngest children in singing verse two. The adult choir takes verse three. The remainder of the verses are sung by the largest choir of the church—the congregation.

The late Sir David Willcocks provides us with the free harmonization of the last stanza as we sing praise to the Trinity—Father, Son, and Holy Paraclete. The recording is that of the choirs of Westminster earlier in December 2019. May your celebration of Christmas be filled with the light, love, and joy expressed through our music.

Fourth Sunday of Advent – The Candle of Love

What is love? What do you love? How do you show love?

As you light the candle of love, spend time talking about what love means to you and your family. Take the time this week to intentionally show love to others, and don’t forget to take the time to love yourself.

The children of Westminster were asked to talk about the word love. This is their response: 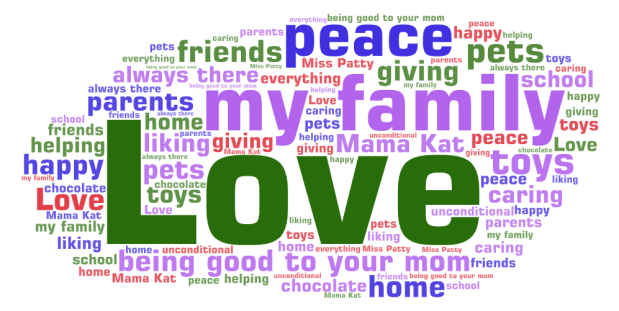 Dear Lord, thank you for giving us love. Thank you for the ability to give love as well as to receive it. Amen. 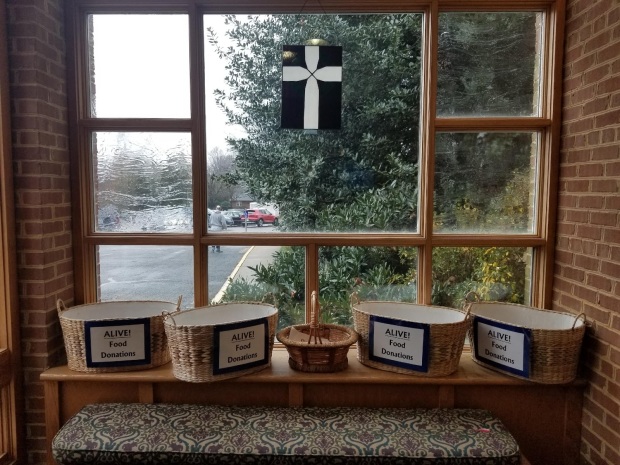 In the Advent season we await and celebrate the coming gift of Jesus to our lives and the world. It is a glorious time to reflect on the gifts God continues to provide in our lives and share these gifts with our friends and neighbors. Through our long-standing relationship with local Alexandria agencies, Westminster Local Mission offers low barrier ways to share God’s gifts with our less fortunate neighbors. Westminster collects non-perishable food items for ALIVE and distributes “people in need packets” regularly to those without a stable home. Baskets to receive donated items for both of these local ministries are found in Fellowship Hall and the church lobby entrance off from the parking lot.

This food distribution service at the Ladrey building in Old Town serves senior citizens and other clients. Volunteers prepare 90 bags of food the last Saturday of each month and distribute to people in the building and others who need assistance and are identified through the social services agencies in Alexandria. This opportunity is great for families or groups.

As part of your Advent Devotions, follow through on your desire to serve by adding a last Saturday date for 2020 to your calendar. Or, simply contribute some non-perishable food to the ALIVE donation baskets in the church lobby as you come into Christmas Eve services this week. In these ways you will feed those for whom the world has said, “there is no room in the inn.”