So when the woman saw that the tree was good for food, and that it was a delight to the eyes, and that the tree was to be desired to make one wise, she took of its fruit and ate; and she also gave some to her husband, who was with her, and he ate. Then the eyes of both were opened, and they knew that they were naked; and they sewed fig leaves together and made loincloths for themselves. They heard the sound of the Lord God walking in the garden at the time of the evening breeze, and the man and his wife hid themselves from the presence of the Lord God among the trees of the garden.

But the Lord God called to the man, and said to him, “Where are you?” He said, “I heard the sound of you in the garden, and I was afraid, because I was naked; and I hid myself.”

The Lord God said to the serpent, “Because you have done this, cursed are you among all animals and among all wild creatures; upon your belly you shall go, and dust you shall eat all the days of your life. I will put enmity between you and the woman, and between your offspring and hers; he will strike your head, and you will strike his heel.”

To the woman he said, “I will greatly increase your pangs in childbearing; in pain you shall bring forth children, yet your desire shall be for your husband, and he shall rule over you.”

And to the man he said, “Because you have listened to the voice of your wife, and have eaten of the tree about which I commanded you, ‘You shall not eat of it,’ cursed is the ground because of you; in toil you shall eat of it all the days of your life; thorns and thistles it shall bring forth for you; and you shall eat the plants of the field. By the sweat of your face you shall eat bread until you return to the ground, for out of it you were taken; you are dust, and to dust you shall return.”

The man named his wife Eve, because she was the mother of all living. And the Lord God made garments of skins for the man and for his wife, and clothed them. [Genesis 3:6-21] 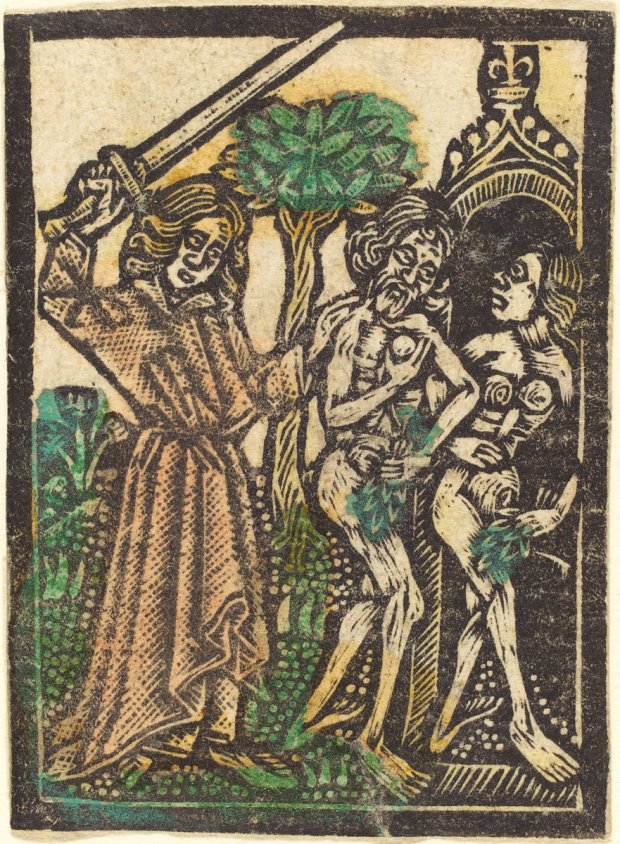 Workshop of Master of the Aachen Madonna, The Expulsion from the Garden of Eden, 1460/1480.

Through the ages, the church has regarded Jesus Christ as the new Adam, who came to save humanity from the tragic sin that originated from (or is epitomized by) the “old” Adam and his wife, Eve.

A theological question arises: Had Adam and Eve chosen not to eat forbidden fruit, would Christ have needed to come? Should we be somehow grateful for the First Couple’s tragic disobedience, without which we might not know the love and mercy of our Lord? This strand of thinking exists in the historical church, which explains in part why this “bad news” text is part of the Advent cycle of readings, but it can be hard to accept. Would we celebrate a cancer because of the joy of its remission? Would we embrace the ravages of war, without which we would not know the relief of armistice?

And yet, so often we hear those emerging from periods of great ruin and suffering describe how paradoxically grateful they are for their hells, because of the new life that emerged through them. I have heard people express gladness for their battles with addiction, which shaped them into new people, capable of greater love and forgiveness. I have seen a friend nearly destroyed by his divorce nonetheless embrace it as a part of the journey that led him to the wife and marriage he now cherishes. In the church, we honor the cross for a similar reason, as we acknowledge how a grotesque tool of torture and death became an instrument of eternal life. It is this perspective that allows us to call the terror of Good Friday, “good.”

The point of this is not to solve riddles (is darkness really a necessity of light?) or be persuaded to celebrate suffering or sin of any kind as a prerequisite of healing or forgiveness. Our invitation, instead, is to celebrate and anticipate the ways in which the God of our faith shines light in the midst of darkness so that even our horrors can become vessels carrying the possibility of transformation and gratitude. If Adam and Eve’s shame in seeing their nakedness led them to receive the very fabric of God’s mercy, may we in Advent look upon all that is unworthy of praise as the raw material through which we receive the joy that awaits us in Christ.

And so we pray anew the prayer of the ancient church, saying, “Come, Lord Jesus!”

Adam lay ybounden,
Bounden in a bond;
Four thousand winter
Thought he not too long.

And all was for an apple,
An apple that he took,
As clerkës finden written
In their book.

Blessed be the time
That apple taken was.
Therefore we may singen
Deo gratias!